GET IN TOUCH WITH US

Thank you! Your submission has been received!
Oops! Something went wrong while submitting the form.
INSIGHTS

05/17/2021 Recently, there has been a lot of exciting buzz around alternative energy being used throughout the transportation industries. Companies such as Tesla, General Motors & Toyota have all announced their investments into alternative energy medium & large sized trucks. It seems inevitable that zero-emission vehicles will one day be the norm across the United States, but how far off are we? This question is the toughest to figure out. While there is a ton of noise around zero-emission vehicles (ZEVs), the production and infrastructure is simply not where it needs to be. With that said, one of the key factors pushing the development of ZEVs is the legislature established from the California Air Resources Board that take effect in stages starting in 2024. The first year of this regulation requires 9% of Classes 4-8 straight trucks sold in the state to be zero-emission vehicles.

Figure 1: US Department of Energy 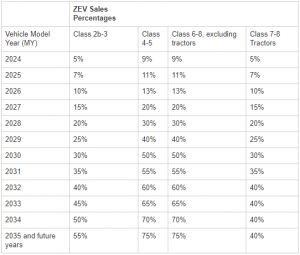 Not too long ago the US made a change to a cleaner, natural gas which quickly took over and became normal, especially for everyday drivers. The same thing happened with biodiesel, lowering emissions and creating a new standard for medium to large-sized vehicles. The obstacles that arise for these new types of trucks using electricity and/or hydrogen are different because they require new vehicles & new fueling stations. This requires a lot of investment and a lot of infrastructure to be built in order to have these new trucks become popular. As of right now, the Tesla prototype class 8 trucks have an enormously heavy battery which is said to have a charge of 300+ miles and will cost roughly $180,000 USD, exceeding current truck prices. On top of the upfront cost, due to its weight must carry a lighter load. 100% hydrogen-based trucks are not as popularly discussed due to the large, flammable hydrogen tanks that would be needed on the trucks and the enormous fueling stations required to store the light, hydrogen fuel-cells. There are however electric-hydrogen hybrid trucks that are in the prototype stage which would allow a smaller tank and use regenerative braking to recharge itself, according to Paccar executives.

The biggest issues that we currently see include the cost of the new fleets, lack of infrastructure, lack of benefits in having a ZEV fleet and of course the big one, a lack of production! There is currently not a Class 8 ZEV truck being mass produced in the US. In the future, this could change but we don’t see that happening for another 20 years or so. The most likely application & use of ZEVs in the near future will be with local trucking, transit, busses etc. These specific types of transportation will have an easier road to its applications because of their centralized travel and lighter loads.